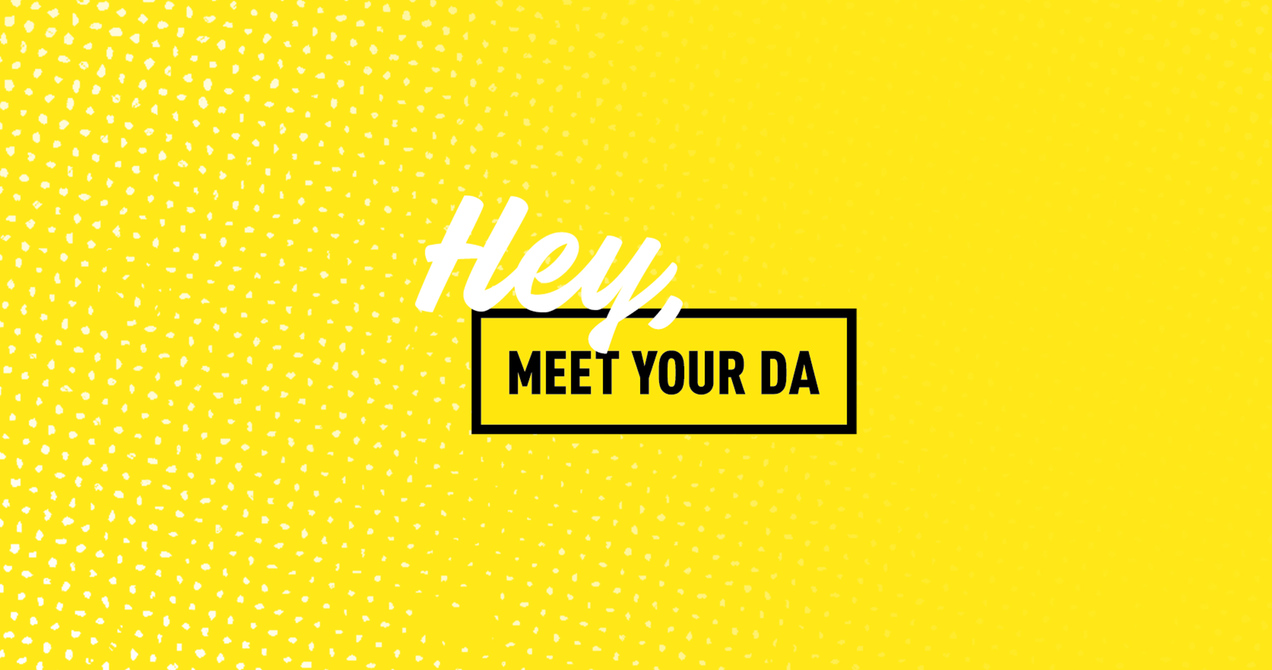 District attorneys are elected officials who hold a tremendous amount of power. They decide who gets charged with a crime and how serious the charges will be. The problem is that most voters don’t know who their DA is or what they stand for–until Meet Your DA, a campaign we launched for ACLU of Northern California.

Our efforts began at Desgnit, elefint’s annual event series benefiting select nonprofits. During the event, our team facilitated a 3-day design sprint with 16 senior designers, animators and strategists from leading tech companies in the Bay. Experts from the ACLU including Ana Zamora, former Director of Criminal Justice Reform at ACLU Northern California. Senior content strategists from Planned Parenthood were also in attendance. Together, we dove deep into the world of criminal justice reform and the important role district attorneys play in shaping the trajectory of individual lives, families and communities for generations. Following Desgnit, elefint continued to work with the ACLU to launch MeetYourDA. 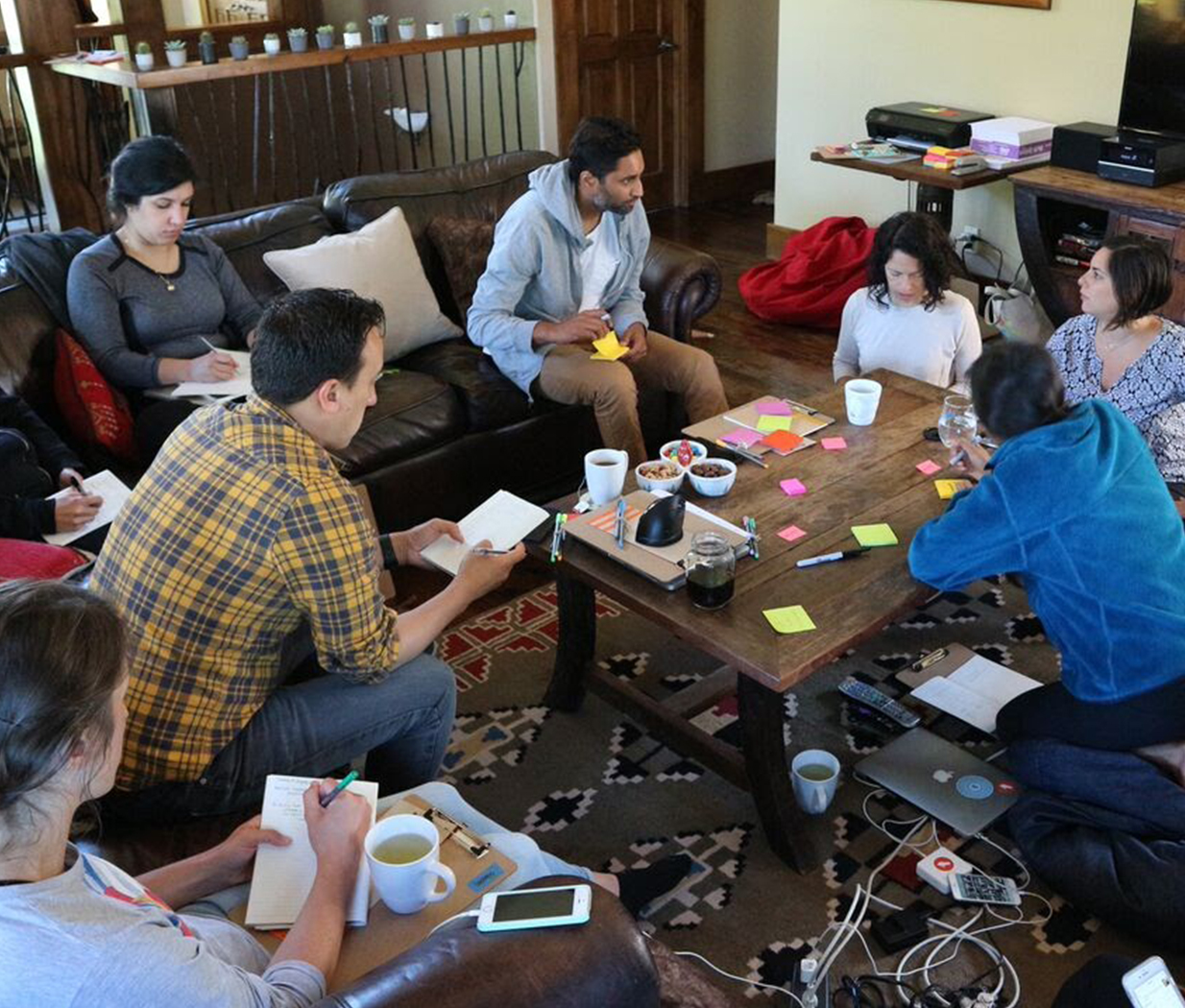 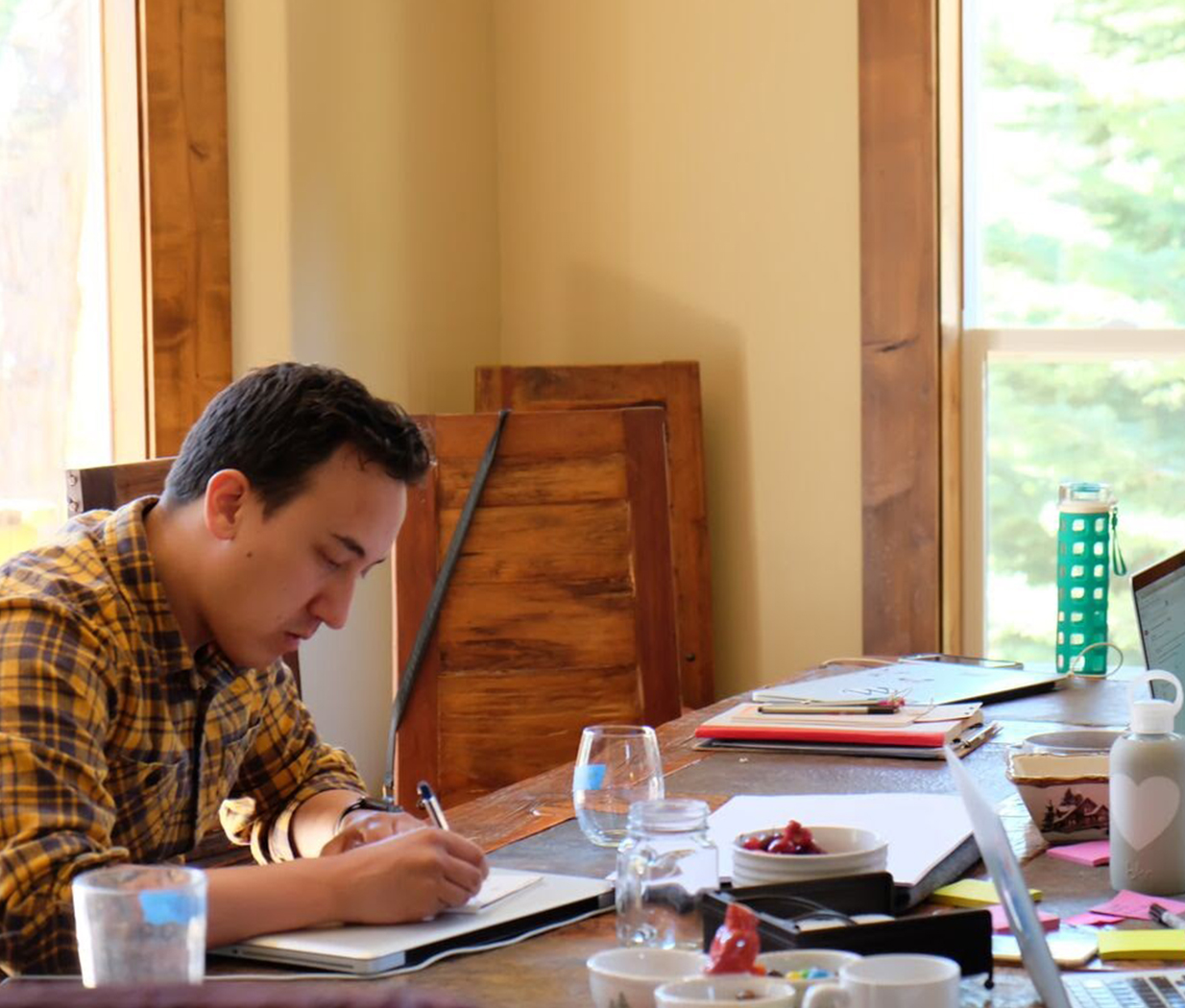 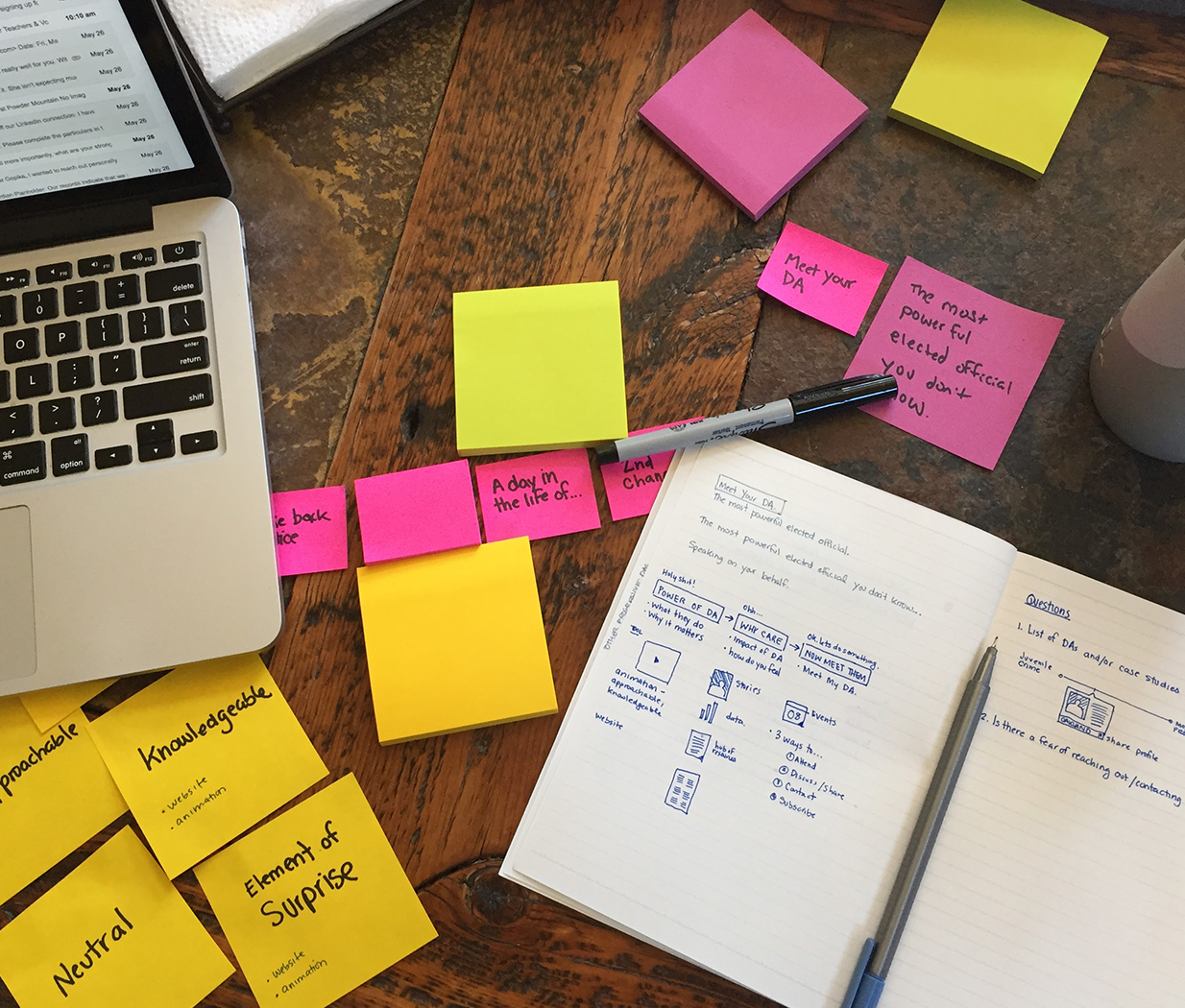 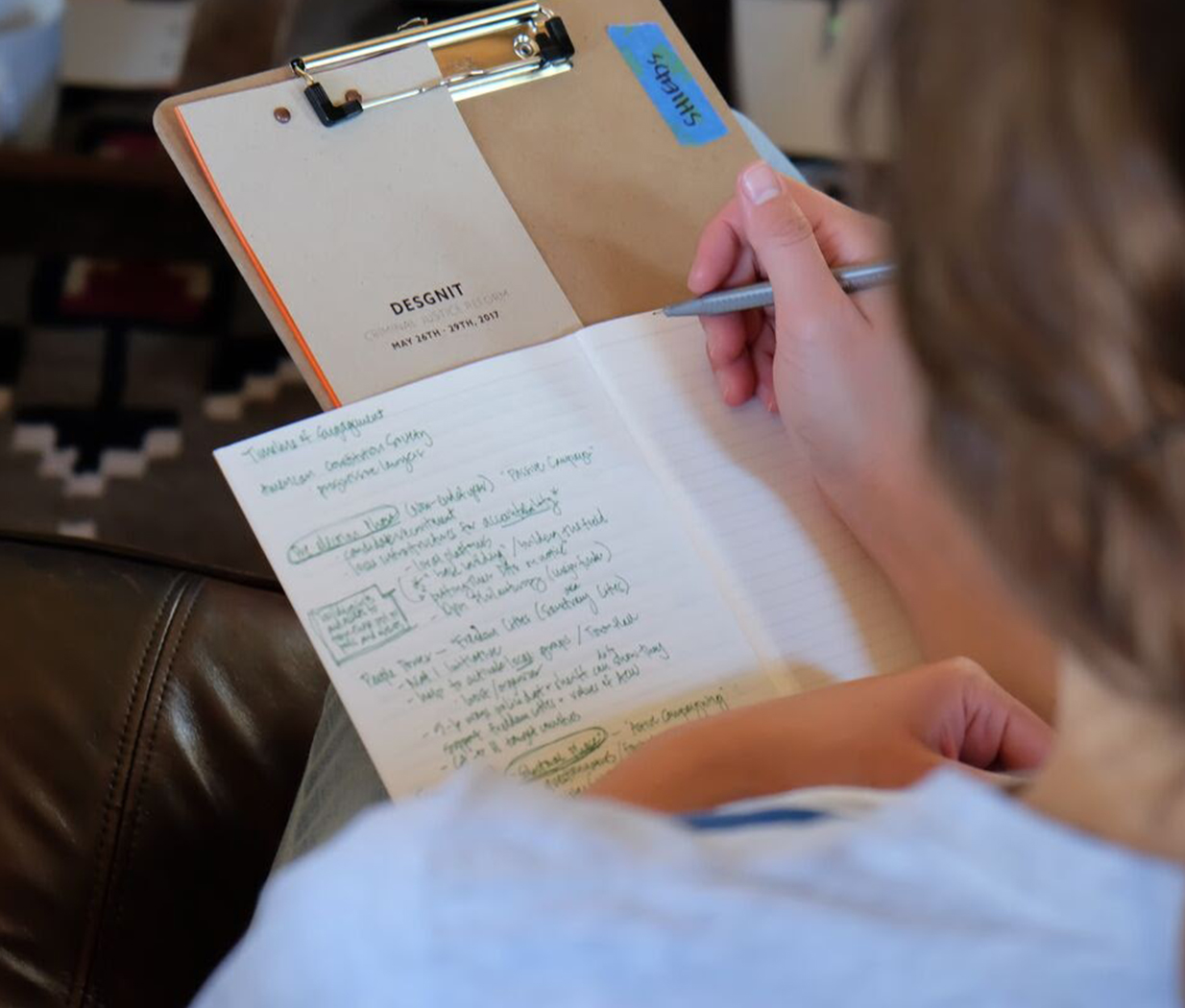 From education to activation to long-lasting change

For decades, district attorneys, who have enormous power in the justice system, have been running largely unopposed in California and across the nation. Campaign planning–understanding demographics, intended outcome, and identifying metrics for success–was essential in the development and rollout of a successful campaign. We mapped out an 18-month plan that focused first on voter education in California. One of the main successes we immediately saw upon launching the campaign was the amount of organic online chatter from key players in criminal justice reform. We were thrilled that more people than ever understood the role of their DA.

While not all of the progressive candidates took office following the 2018 California primaries, the ACLU remains positive that long-term systemic change is on the way. They stated, “not only has the number of contested races increased, the nature of those races shifted dramatically this year. While “contested” district attorney races in prior years most often involved establishment candidates running to defend the status quo, in 2018 many contests included candidates who embraced reform platforms–including more candidates who are women of color.”  Source

Diana Becton was elected as Contra Costa’s district attorney. She is the first African-American and first woman to be elected DA in the office’s roughly 160-year history. This victory is an incredible reminder of how valuable education is in mobilizing change. Learn more about ACLU’s criminal justice reform strategy here. 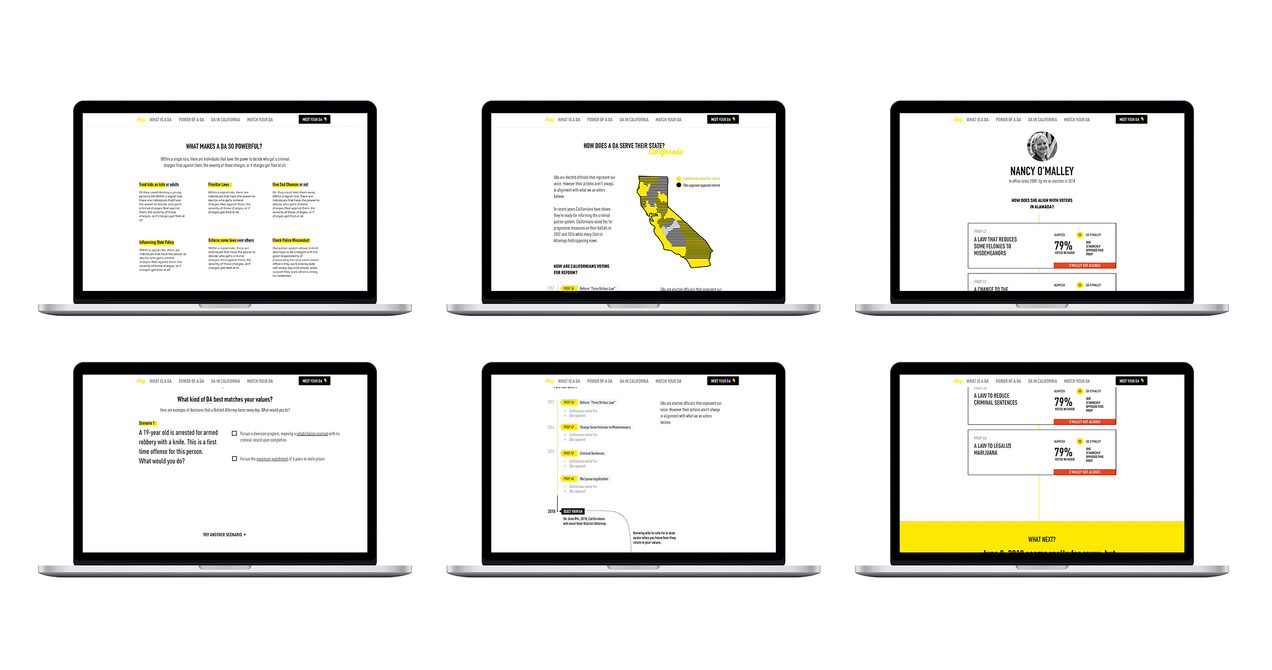 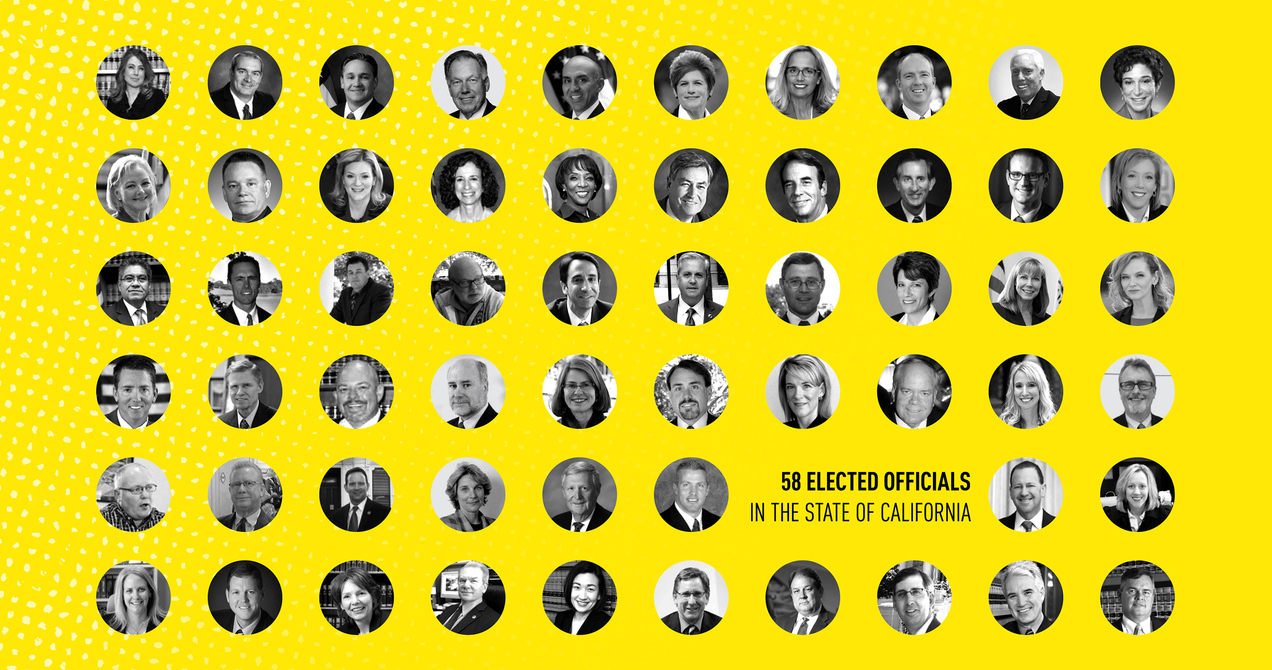 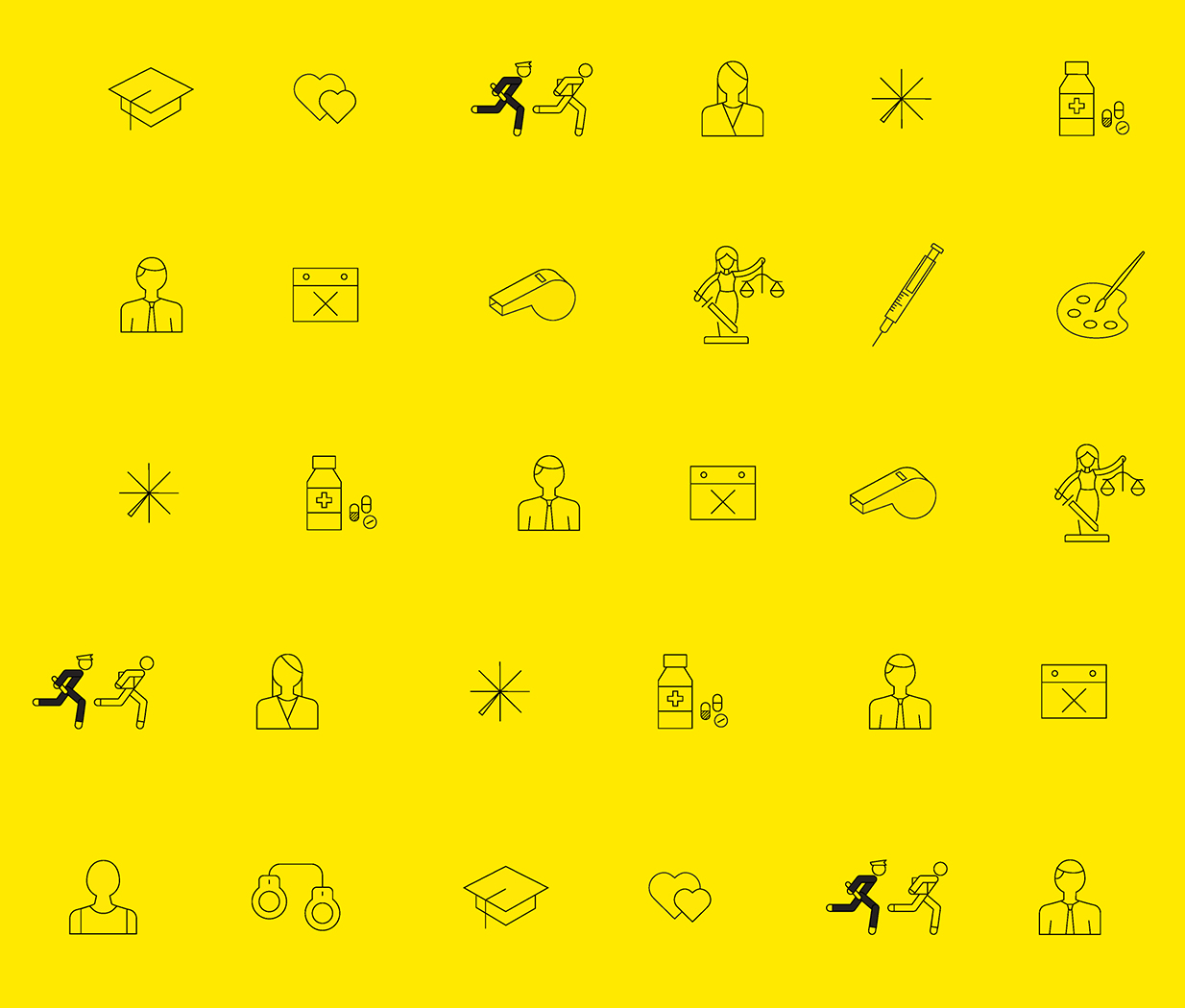 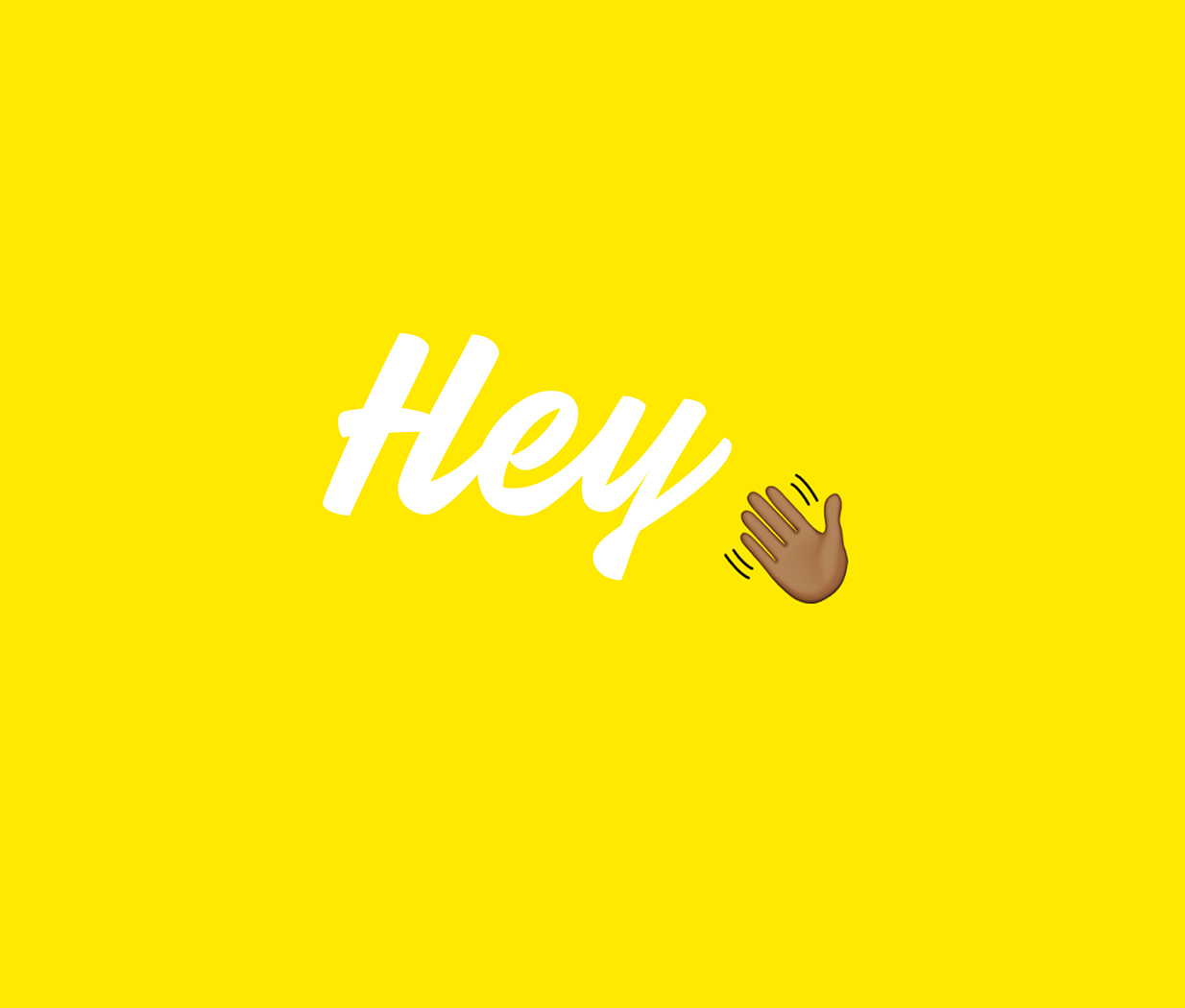 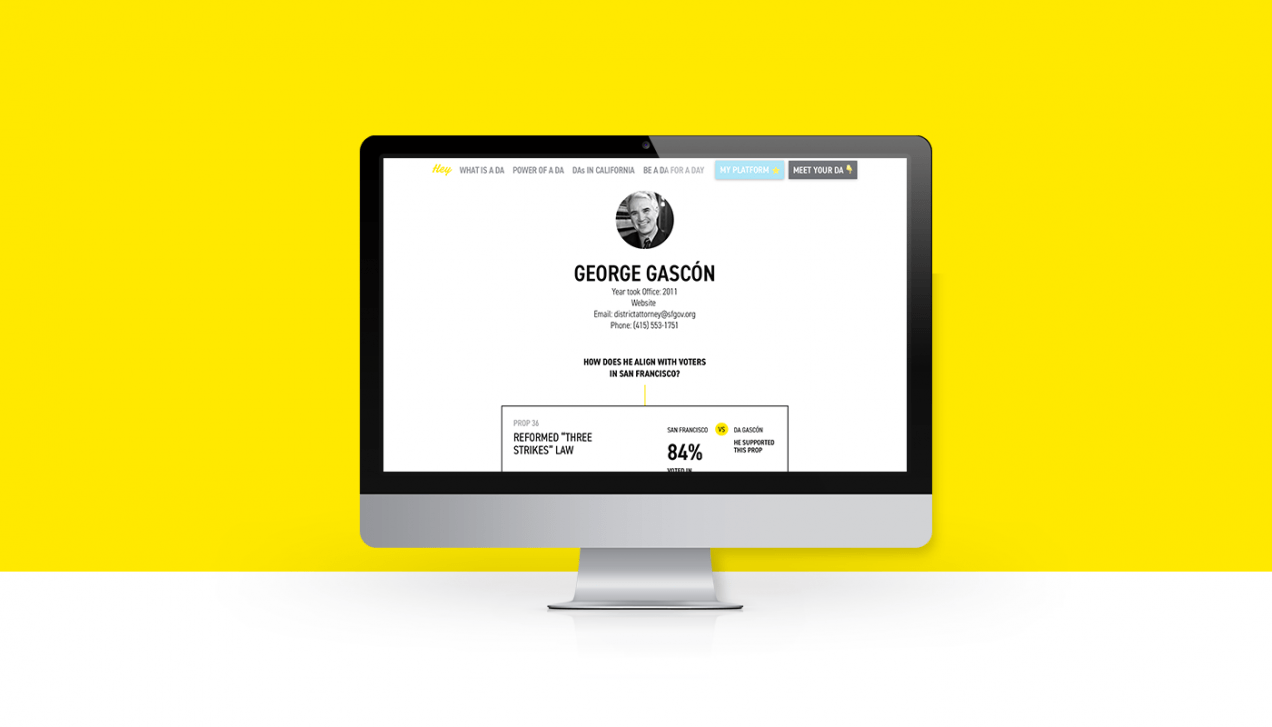 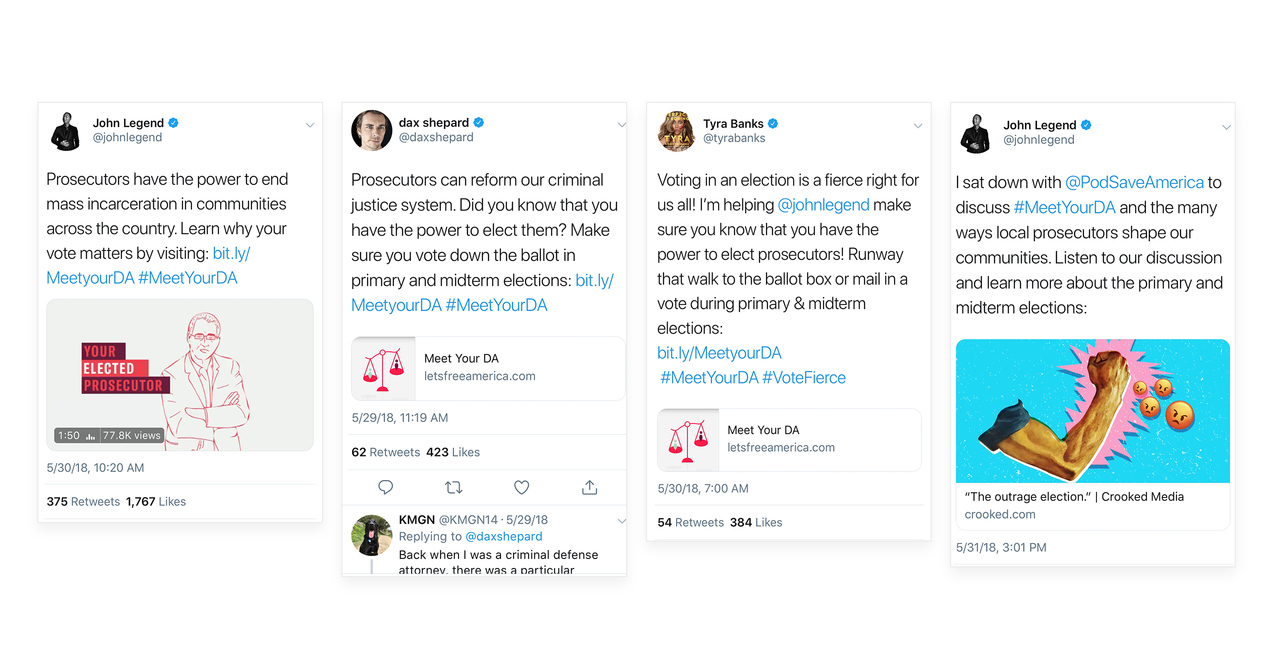 The MeetYourDA campaign was launched in May 2018, just in time for the California primary election in June 2018, when almost every district attorney in the state (56 out of 58) was up for reelection. As a close advocate of the ACLU, singer-songwriter and founder of Free America, John Legend, joined our efforts as the spokesperson for the campaign. He plugged the campaign on the popular podcast, Pod Save America and promoted it widely on social media. The ACLU considered the campaigns to be a success based on a significant increase in voter participation in DA races.

Elefint continued to work with the ACLU and key organizations tackling criminal justice reform across the country. With a focus on voter education and community mobilization, we launched: 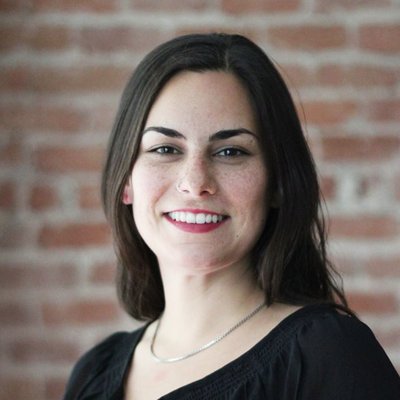 "What we’re trying to achieve with this campaign is very difficult. The only way to be successful is through really smart design and design that’s really focused on user experience. Just to be very blunt, this would not have been possible without [Elefint]."
Ana Zamora
Former Criminal Justice Policy Director, ACLU Northern California 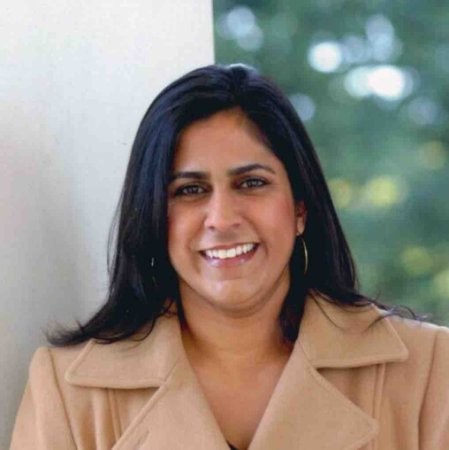 "We loved how [elefint was] able to tackle our new project with lightening speed and efficiency, and yet give us a bold creative vision."
Neelum Arya
FreeAmerica 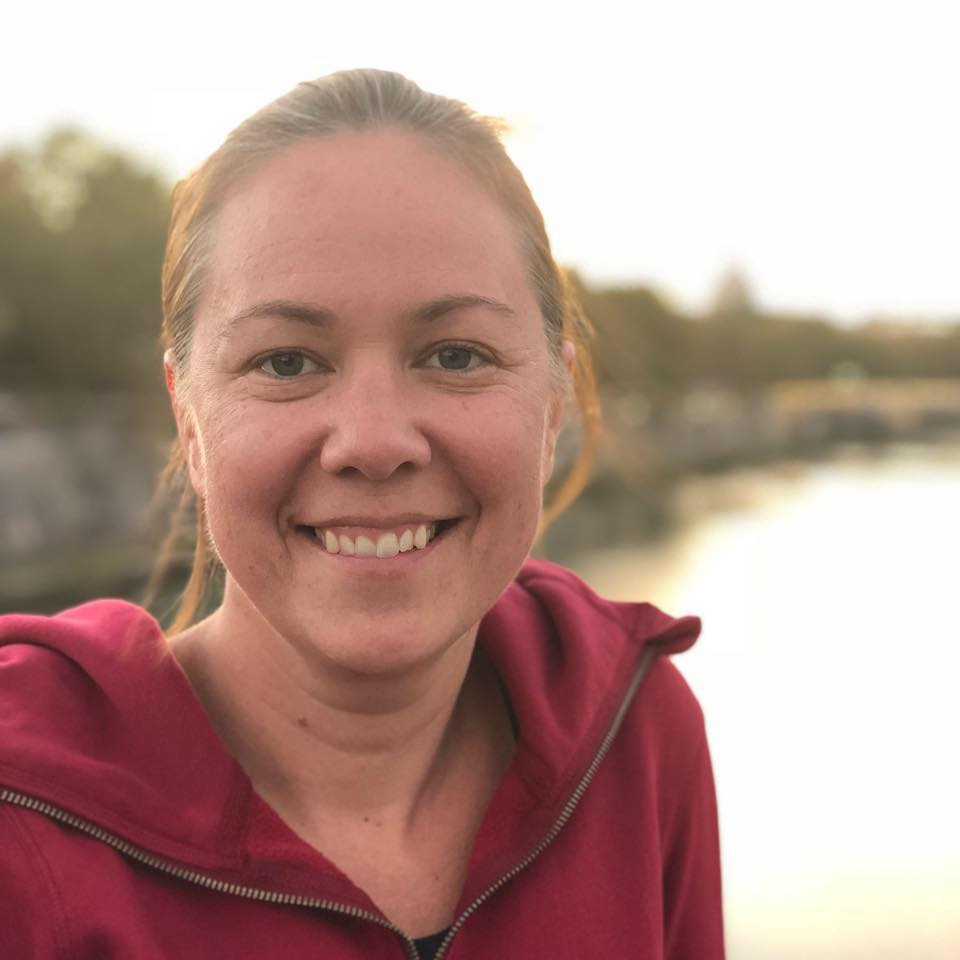 3 weeks after the campaign launch...

sent to district attorneys in CA

of the motion graphic

John Legend on Pod Save America

On the ACLU utilizing tech

Article in The Oregonian